So I had an interview with a flight school today! It went very well, I went flying with the boss and he liked me. I have the job if I want it, which is great news!

I have to decide whether or not I can afford to move out of state to take the job. Apartment hunting will commence, but as well as trying to find a cheap place, the boyfriend and I have to figure out WHERE. That will depend on where he's based as a captain, which we won't know for about a month. If he gets either HGR or LNS we'll have to live close to one of those airports. If he's based somewhere like ALB, it won't matter because he'll just commute.

I like the flight school; they have nice, new airplanes and keep up on their maintenance. Every airplane's book has a sheet w/ the due dates for its annual, 100-hr, transponder and VOR checks. They should have lots of business in a few months -- I just have to figure out how to afford to eat until then.

Tomorrow would've started my 3rd year with Spirit. *sigh* It stinks being furloughed but I've kind of reached a happy medium, finally. I'm in a zen state, you could say. I can't just sit and wait to be recalled - I need to be productive and forget about them until I get that phone call.

On a funny note: today is my bear's 2nd birthday. Dave Bear -- he was a present from my boyfriend, David, the day I left for Spirit new hire training. I love this bear. It seems silly to be in my 20s and have a stuffed animal that I take on all my trips, but I like to say that he's a well traveled bear. He was there when I was practicing my flows, he helped keep me company when I was lonely. So I don't care if anyone thinks I'm silly; they're just jealous. :) 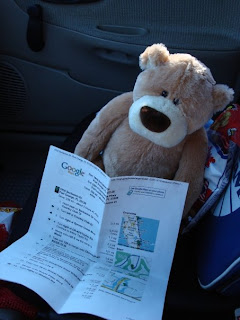 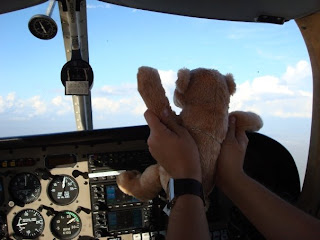