The NTSB released a preliminary report on the tire blowout incident on an August 26th JetBlue flight. Thanks to Airline Pilot Central for the article.

The NTSB decided that the A320's parking brake was on when the aircraft landed, resulting in the main landing gear tires blowing out and a small fire. Thankfully all the passengers and crew evacuated safety.

I went straight to my manuals to determine whether or not the pilots should have received any indication that their parking brake was on in flight. Here are two screen shots from my manual so you can see for yourself. I won't go into the specifics of which computers monitor the parking brake or anything heavy like that because I want this to be a quick and dirty post. Please post or tweet me questions and I will write a more detailed description tomorrow (when there aren't fall premiers on TV distracting me). 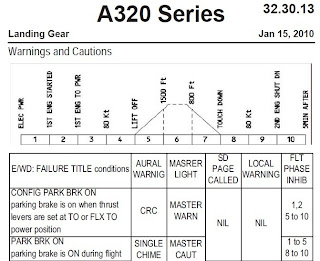 This page illustrates the 10 different phases of flight that the computer's logic uses to decide when to display messages or when to inhibit them. This says that if the parking brake is one during phases of flight 6 and 7, a single chime and master caution will be generated. This would present as a amber memo on one of the center display units, an aural DING!! and the master caution lights will illuminate. This is any time after the plane has climbed through 1500 feet until it touches down.

On the next page we see that when the parking brake is on during all other phases of operation, which are considered normal times to have the brake on, the crew will get a normal green annunciation.

It will be interesting to watch the investigation progress to see if the crew did receive the caution from the airplane's computers. There is a tendency among A320 pilots to label some cautions erroneous. I've had plenty of cautions that we investigated only to find that there wasn't a problem in the first place, a downside to flying such a computer-reliant machine.

EDIT: Thanks to Tweep @thermalhound for the following reminder: "Just read your blog on PARK BRK on. FYI not all a320s on same s/ware so some only display PARK BRK ON
Posted by Mikel at 8:32 PM No comments: