The slow season on reserve

The weeks in between Labor Day and Thanksgiving are historically low travel periods for airlines. Kids are back in school and not many people are taking vacations. Flying for an airline that mainly caters to vacationers, September and October are very slow months. In fact, in 2008, my furlough occurred immediately after Labor Day. Basically, right now I'm just happy that I'm not back in that same spot.

I only flew 30 hours in September, way down from the 80 hours a month I've been flying since June. To be honest, it was a relief! I was exhausted. I didn't want to see an airplane ever again! I felt like I hadn't slept in my own bed in 3 months. I'm pretty sure in August I actually slept more in our crew hotel in Ft. Lauderdale than I did in my own bed.

Unfortunately as a result of the busy schedule I had to drop my graduate class. The first 3 weeks of the class I flew so much that I could not keep up with the coursework. The transition (the period of time when one month is ending and another begins, and is typically a hectic period for scheduling; I flew 10 days with only 2 days off in the middle) really did me in. I hope to pick back up with classes soon.

While my days off have been pretty chock full of fun activities (visiting family, exploring Pennsylvania) my reserve days haven't been. When I'm on reserve I really can't venture too far from the house. Our airline rules stipulate that I must be in the cockpit ready to go w/in 3 hours of a phone call from scheduling, if that flight is scheduled to leave by then. Typically I get an assignment the day before but you never know when someone will call out sick for their trip at the last minute. It takes me 2 hours and 10 minutes, on average, to drive to the airport, which luckily is plenty of time to park, get through security and get to the airplane (gotta love working at a small airport!). The captain will typically do the walk around and other checks normally left for the first officer if he knows he or she is coming in on a late call out.

In short, I'm basically stuck to an area that includes my apartment, the airport my boyfriend flies out of, and the grocery store.

I've always been interested in cooking and baking. Living with someone who will literally eat ANYTHING really helps; I can make anything I can think of and I know David will eat it. And being on reserve gives me the time and opportunity to stay at home and explore dishes that I would typically never dream of making.

Here's most of my cookbook collection: 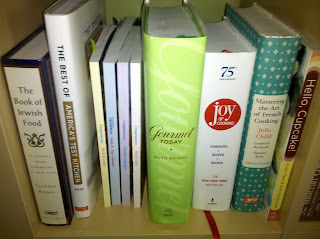 I'm completely obsessed with Irma Rombauer's "Joy of Cooking." Every recipe I've made out of this has been perfect. Many of the recipes date from pre-WWII. I'm not sure why this is, but I love the idea that I'm making something that a woman in the 1930s was making.

Another incredible success was the chocolate babka from Gourmet. Babka is a traditionally Eastern European dessert, a sort of sweet bread loaf with chocolate filling. I've grown up on babka's brought back by my Bubbe from NYC. 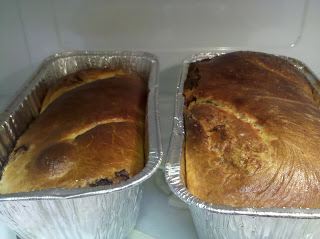 After being inspired by Mrs. Wheelbarrow on a recent NPR episode, I tried my hand at canning. I made her Apple Pie Jam, which tasted delicious but unfortunately did not set up as firmly as jam should be. It's more of a marmalade. Not bad for a first try, though! 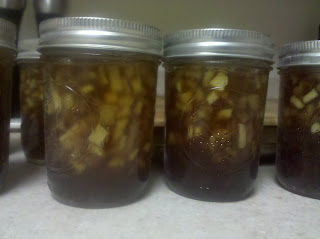 The weather has been cold and rainy all week, so I've been inspired to make stews and soups. I don't have pictures of my butternut squash and chicken soup or yesterday's ratatouille, but here's the beef and barley stew I made last night. I made it from a Weight Watchers recipe, which uses parsnips and celery root to replace the potato. They're starchy enough that you don't even miss it! 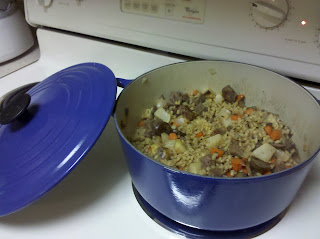 In the future you can expect a nice mix of flying, cooking and knitting, which are swiftly becoming my top 3 hobbies. I joke around and tell people that "inside this airline pilot is a 1950s housewife screaming to get out." Maybe a girl will read this and see that you CAN be kick-ass and girly. It's not hard, all you need is a little cabin fever.